CODE: SAVE15
HomeFashion
By LensDirect on February 2, 2016 Fashion Glasses

Eyeglasses at one point in time were associated with the nerdy or geeky set (we know…you’ve never thought this way). However, eyeglasses are just not looked at in that way anymore. Celebrities who wear glasses have helped to create a cultural shift in eye wear acceptance just by wearing them! Now, they are one of the most sought after fashion accessories to help people everywhere enhance their looks!

Jump to 2016. Which celebrities are wearing eyeglasses, and what kinds of glasses do they wear? After checking out dozens of celebrity styles, one thing became absolutely clear – celebrities love dark, thick-rimmed frames. These glasses provide a classic look, usually in a neutral black, framing the face in a bold and distinguished way.

To touch on every popular celebrity known to sport a pair of thick-rimmed square glasses would be exhausting. What we have done instead is focus on those celebrities we feel are really able to pull off the look. We hope you enjoy!

This popular American actress has starred in films like The Amazing Spider-Man, and the critically acclaimed Birdman. Typically she’s not caught wearing glasses, but when she does, she chooses a neutral black to pair with a casual seeming outfit. That’s one great thing about these frames, and one of the reasons we bet they have remained popular throughout the decades – they can work well with formal wear, but just as well on a casual day.

Stone received a lot of attention for her role as Eugenia “Skeeter” Phelan in the film The Help. The forward thinking role was perfect for the actress, and so were the classic Ray Ban frames that were chosen for her to wear. Not only did they fit the time period exactly- they also came off in an authentic seeming way. 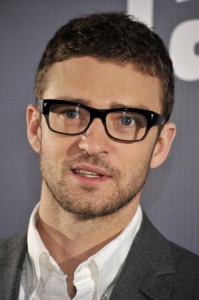 This is one celebrity who has never been out of the spotlight, launching his career in the 90’s with NYSYNC and then finding his place as a solo artist soon after. Hits like “Cry Me a River” and “SexyBack” have brought the popular artist, as well as the simple, boxy, nerdy frames he likes to wear on stage and in public into the minds of millions of Americans.

These frames tend to the draw attention to the face, but not in a way that is overbearing. For a musical artist who is already the center of attention, and for many of you who simply want a good-looking frame to wear, they can be just the right thing. Sometimes, it is best to let the suit and tie do all the talking!

Johnny Depp is a man who needs no introduction, but to whom we have decided to give one anyway. On top of the world-famous Edward Scissorhands, the actor has played a staring role in the Pirates of the Caribbean films, the new iteration of Charlie and the Chocolate Factory, and dozens more.

The actor can be spotted wearing stylish black and tortoise-rimmed glasses, but with a minor twist. His lenses are usually tinted with a shade of blue to provide sharper vision, just a little bit of protection from the sun, and of course that distinguished, Johnny Depp-type of look. Can you imagine walking into work with a tint like this? You might just become famous that day!

All right, so thick-rimmed glasses are “in” with the current crowd of American celebrities. While they can and do look great, that doesn’t mean another style cannot suit you just as well.

Sign up and get exclusive promotions, special offers and more!